Anna Taratiel’s series of murals in Hoptille consists of 26 murals which are painted sequentially on different parts of the facades. This Spanish artist, who started her artistic journey painting abstract graffiti in the streets of Barcelona under the moniker Ovni (Spanish for UFO), usually works with geometrical abstract shapes. Although her work uses mainly angular shapes, which is reminiscent of  modernist muralism, Taratiel surprisingly cites Friedensreich Hundertwasser who fiercely opposed modernism and straight lines as a major influence, but on a closer look it makes sense, when considering her Hoptille approach. Hundertwasser declared what he called the “Window Right”: “(A person in a rented apartment) must be allowed to take a long brush and paint everything outside within arm’s reach.”

At Hoptille, where she was invited by R.U.A., Taratiel based her murals on an experimental, interactive and participatory design. She developed a range of geometric forms and shapes. These could be freely arranged on models of the facades by local people via an online game but also as wooden “Parts ‘n Pieces”, as the project was called, right on the street. “The game was to drag and drop the shapes into a virtual canvas of the scaled size of a mural of Hoptille. People would be able to make their own compositions” as Taratiel explains. Then they were painted by the artist and her assistants. 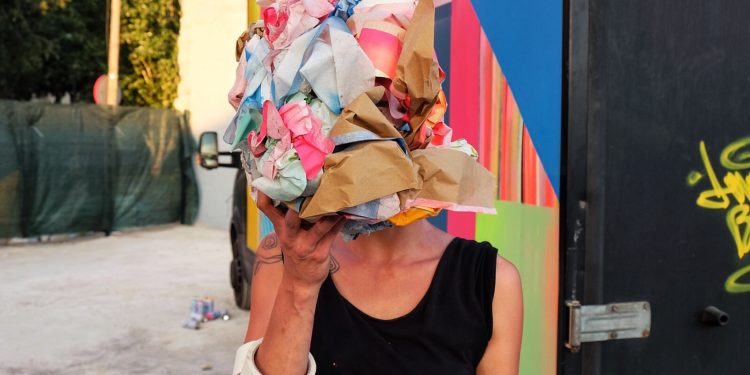