In 2016, Favela Painting returned to The Netherlands to start thier first project back home. In this year a lot of refugees came to Europe and the cities were in need of new and fast solutions to help create a humane and liveable situation for refugees in their new temporary homes. The first big project of the Amsterdam crew was to extend the entrance design around the front of the former „Bijlmerbajes“ prison which was turned into a refugge living facility. The crew worked alongside local Amsterdam volunteers and completed the painting in over a month. Since painting the entrance in the summer of  2016, a steady paint crew emerged which consists of both locals and newcomers. Newcomers face long waiting times and strict limitations while their asylum requests are processed. By designing the project in a way that was open, flexible and inclusive allowed them to reach a diverse group of newcomers with varying needs. Whether newcomers help for one day or multiple months, the goal is for them to take something positive away from their painting experience. 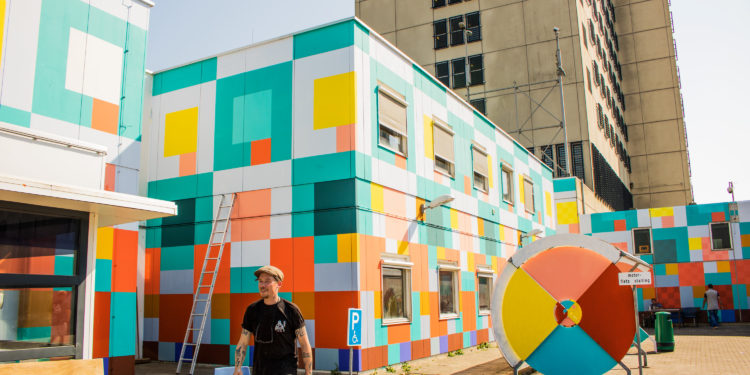